Speakers > Headphones
Sound source localization
With stereo speakers you have a different staging than with headphones. The localization of phantom sound sources works with headphones due to the lack of room acoustics with an impressive sharpness - but the stage is different.
In head-related localization is based on several localization stimuli. With headphones, the result is almost always an in-head location of the instruments - but this stage can vary greatly from model to model. The human ear has several complementary ways of locating a signal.
Due to filter effects on the ear-geometry, diffraction and shading effects by the head, etc., the signature of sounds gets strongly modified - different for the left and right ear. The corresponding direction-dependent frequency bands are known as blue-touch bands.
With loudspeaker stereophony, the effect is not a big problem. The ears will add the "distortions" (=HRTF) to the incomming sound like it should, the brain will "decode" the sound like always, so the sounds can be located correct: between the speakers. Instinctive turning of the head will improve the localisation. 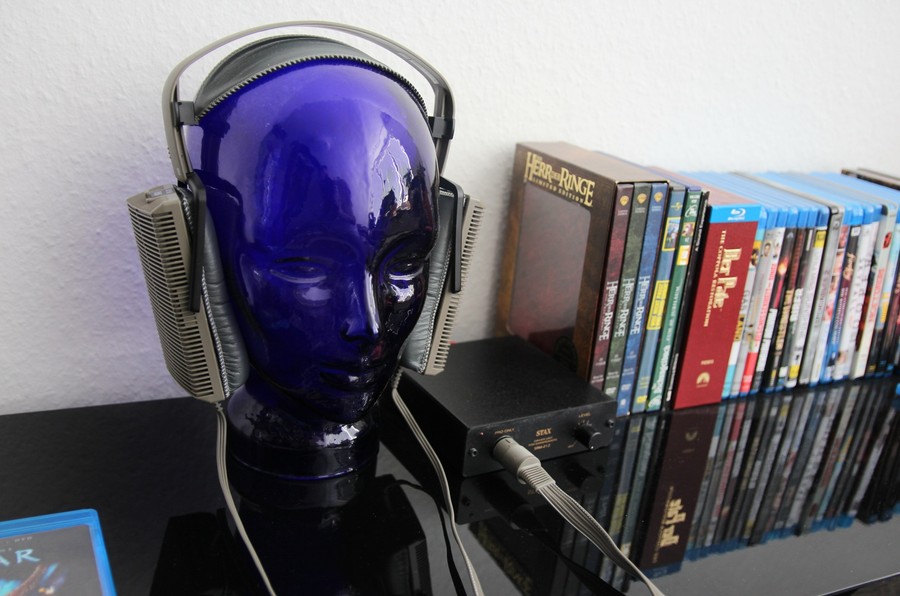 Tuning of neutral colored headphones
If headphones are used for mixing, from the developer's point of view the impact of the HRTF raises the question of how the headphones should be tuned. If the headphones are tuned to a linear frequency response, it will sound completely discolored with a standard stereo speaker recording. After all, the human brain has been accustomed since birth to the sound being pre-filtered by the HRTF.
Those three approches for tuning headphones sound logic. But there is a "but"...
Are you thinking, headphone measurements are more art then science? Yes? If there's still any doubt, we'll take the next step right away...

Figure 2: Measurents with two headphones (left) and one speaker (right)
Above we can see measurents from two pretty good and natural sounding headphones on the left - and a natural sounding speaker on the right.
The first thought might be here: The headphone measurements are easier to interpret. The radiation of the speakers is not measured, so its not possible to understand the interaction with the room acoustis - but the headphones dont radiate in the room.
But far from it: the measurement of the headphones is even more intransparent. The range of several kilohertz is primarily influenced by resonance effects of the HRTF. The headphones go very low in the low bass and will therefore be closed (=are in fact closed), which means that the measurements here depend heavily on the correct fit on the head.
If you move the headphones slightly on the artificial head the curves will probably start to wander.
Therefore: The interpretation of headphone measurements is often pure esotericism. But if you want to have that kind of fun, here are some links to help you:
To make the interpretation of the measurements even crazier: the frequency response of the headphones not only affects the timbre but also the stage.
Localisation with headphones
Like mentioned: You can record music with a plastic head microphone. If you hear the resulting recordings with a neutral headphone, you will (in theory) have neutral coloring and even a normal soundstage without inside-of-your-head-localisation. There are a lot of samples on youtube - grab a headphone and listen if you want. Search for "Binaural Recording". An example: https://www.youtube.com/watch?v=uwDNhBvotks.
If you want to hear chartmusic with your headphones: You will have to accept a inside-of-the-head soundstage. Some ways to escape this...
If you are ok with inside-of-head soundstage: Normal music recorded for speaker-stereophony can be heard quite ok on good free/diffusefield/Harmancurve equalized headphones. The equalization/tuning of the phones will replace parts of the HRTF during headphone-listening, so tuning of the headphone will not not only change the soundcolor but also the soundstage.
Diffuse field equalization depends heavily on the type and correct fit of the headphones.
If you want to tune headphones to a very sharp and present soundstage that is as present as possible, the tuning of the headphone frequency response based on the HRFT based "Blauert ribbons" shown below is recommended.

Figure 3: Tuning of headphones that are as present as possible

IfA correspondingly tuned headphone will have a much more stable and presentable stage image than conventional models. However, the trick for tuning is well known - many sound engineers use such filters as standard when mixing music, after all, this effect also works with normal loudspeaker reproduction. The combination of tuning the music music during recording and via speaker/headphone can be a bit too much.
Headphones will have a "wrong" stage while playing music recorded for normal speakers. Tuning the frequency response for better staging is ok for more accurate reproducing phones to get "closer" to the real sound.
In addition, the effect only works with music that covers the entire spectrum in broadband. With narrowband signals, the effect only has a limited effect. Developers of headphones therefore always need experience.
How do I find a neutral headphone?
If you are using the phones for mixing or just want natural soundcolor: Please hear several phones against neutral monitores and check if the soundcolor is natural with your ears. If possible: look at measurements while or after hearing the phones. Using an equalizer is ok to get the sound closer to your normal speakers.
I bought my personal loudspeakers mainly based on measurents - and I dont regret it. I have never done so with headphones, and I will never do. Just hear some phones, look if they are confortable, enjoy them. You will get amazing sounding heaphones for below 200€ - A comparable stereo system costs many times more. And requires considerable intervention in the room acoustics to achieve a similarly sharp stage image.